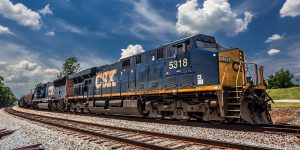 Workers for CSX Transportation, Inc., headquartered in Jacksonville, have filed 27 lawsuits since last year, many of them nearly identical in format, claiming work-related exposure to toxic substances. Eight were filed in 2018.

In the most recent lawsuit filed Friday, family members of a Waycross man said his work as an electrician for CSX contributed to the stomach cancer that killed him in 2015.

“As a result of the negligence of the defendant, [CSX]” the lawsuit complaint reads. “The plaintiff sustained a loss of future benefits including a loss of pension benefits due to his reduced life expectancy.”

The lawsuit also claims CSX failed to provide the employee with a respirator while working on and around the trains.